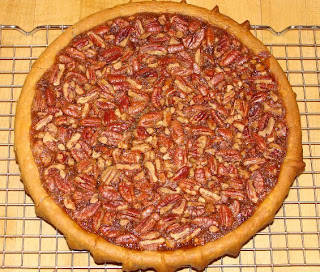 My mother's goal in retirement was to learn to make an absolutely perfect, flaky, delicious pie pastry.

My life's goal has been to never eat pie crust if I can possibly avoid it. So far, I've done quite well, thank you, though there are those irritating bits that scrape off on the fork when I'm scooping out the filling. Someday I'm going to try baking this pie without the crust. If it works, problem solved, right?

Our son was six or seven when we moved to South Carolina the third time. Our first morning there, we went to a pancake place and he ordered a "puh-CAHN" waffle. "That's one PEE-can waffle?" the waitress repeated. No, he replied. Puh-CAHN.

(I've erased from memory the remarks he made when she brought grits to go with the waffle. Mercifully.)

That year we didn't get to come home to Oklahoma for Thanksgiving, so I asked for requests. His dad always wanted mincemeat pie. (I don't care if it is sold in a grocery store, mincement is NOT edible.) The kiddo asked for a pecan pie and sat at the counter sneaking nuts while I made it. He was totally uninterested while I mixed the eggs, Karo, sugar and butter, but when I started to pour it into the pie crust, he got distraught.

"What are you doing? That stuff is gross. It doesn't go in a pecan pie!"

He shrugged, rolled his eyes as if I were the dumbest baker in the world and said, "Pecans. And crust. That's all."

This from a child who ate Cool Whip on sandwich bread.

Everyone's a critic.
Posted by Marilyn at 1:00 AM