From the moment we brought Olivia and Chance into the house, they acted as if they'd been born to such luxury as beds, air conditioning and ice water to drink. They bonded with our other dogs immediately, although Olivia eyed our alpha Jack measuringly every time he walked into the room. She showed no gratitude; the pleasures of being an indoor dog with a steady supply of food and water were hers by right. 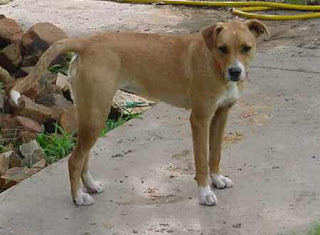 Chance showed his gratitude by climbing on our laps every time we sat down and rubbing his face on ours. It was very hard to watch television, because even though he was a puppy, he was a large puppy mixed of three large breeds.

Because our yard isn't fenced, we took the dogs out on leashes to do their business. Getting a walk with lots to investigate and scent along with a potty break makes the house-breaking business easier.

On our first full day with Olivia, Bob took her out midday for a walk around the nearly-five-acre yard. It was August, a hot, lazy, still time in Oklahoma. The sun shines bright enough to make your eyes hurt. It steals the color from the sky. The clouds are too bored to even drift, and the buzzing of insects never stops.

They walked the yard, and Olivia checked out the apple trees, the post oaks, the maples, the crapes. She pounced on leaves and ducked under the low branches of a giant fir, and she paid special attention to the mole tunnels and gopher mounds. Underground in their cool burrows, the moles and gophers were undeterred by the day's exquisite heat.

After her potty break, they walked a little more, across an open part of the yard that was once pasture and still feels like it when you ride the lawn tractor across it. She took a step, just fine, then took another step and collapsed to the ground on her side.

She lay utterly still. No flicker of her eyes, no twitch of her tail, no rise and fall of her ribcage as she breathed.

He dropped to his knees in the parched grass, panicked now, calling her name in a louder tone, giving her a shake.

Nothing . . . except the slight sly opening of one eyelid, quickly slammed shut again, and the faint upturn of the corner of her mouth. She was trying very hard not to grin.

She jumped to her feet, looking around wide-eyed, tongue hanging out her mouth, and headed toward the house, pulling him along, as if to say, "Let's get inside. It's hot out here. What's the hold up?"

She who had scared every other animal on the hilltop had added her new father to the list. Thinking her heart might have stopped just about stopped his.

She learned fast how much power she had.
Posted by Marilyn at 1:00 AM