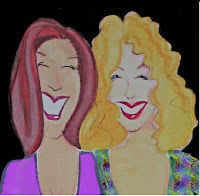 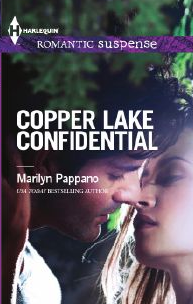 Copper Lake Confidential                                                          Copper Lake, Georgia series
Harlequin Romantic Suspense
01 April 2013
A house with a dark history
After a miscarriage and over a year in a psychiatric hospital, Macy Howard is ready to revisit her old home in Copper Lake, Georgia—a town tainted by memory.
When she returns, Macy meets Stephen Noble, an author and veterinarian, who doesn’t know about Macy’s troubled past. Stephen finds her irresistible, and, finally, Macy feels willing to trust another man. With her family’s help, Macy packs up old remnants—eager to usher in new beginnings. Her future seems hopeful—until strange things start happening in the house: stirrings in the windows…items turning up in unexpected places…lingering scents that don’t belong.
Is Macy slowly descending into madness? Or is something more sinister at work in Copper Lake?
Order here. 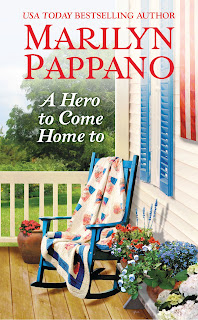 First he fought for his country. Now he'll fight for her.

Two years after losing her husband in Afghanistan, Carly Lowry has rebuilt her life in Tallgrass, Oklahoma. She has a job she loves teaching third grade and the best friends in the world: fellow military wives who understand what it means to love a man in uniform. She's comfortable and content...until she meets a ruggedly handsome stranger who rekindles desires Carly isn't quite sure she's ready to feel.

Staff Sergeant Dane Clark wanted to have a loving family, a twenty-year Army stint, and then a low-key civilian career. But the paratrooper's plans were derailed by a mission gone wrong. Struggling to adjust to his new life, he finds comfort in the wide open spaces of Tallgrass--and in the unexpected attention of sweet, lovely Carly. She is the one person who makes him believe life is worth living. But when Carly discovers he's been hiding the real reason he's come to Tallgrass, will Dane be able to convince her he is the hero she needs?
Order here.

Posted by Marilyn at 8:47 AM No comments:

I'm never at a loss for words. I can easily say in a hundred words what someone else can say in ten. Like Seinfeld, I can talk a lot about nothing.

But sometimes I find myself at a loss for meaningful words. My husband asked me what it felt like when I get a particular vertebrae that gives me a lot of trouble adjusted, and all I could come up with was, "Good." I'm pretty sure that if I put myself into a character who was asked the same question, I could describe the touch of the hands; the pressure, gentle at first, then increasing; the hard push; the twist of the hands; the loud craack!; the instant of pain, followed by warmth and tingling; then the relief.

I hear about someone who's going through a tough time, and I say, "Poor thing" or "Bless her heart," when the heroine in my current book would say, "Oh, that poor darlin'. That just breaks my heart. I can't imagine where she'll find the strength to get through this, but I'll pray that she does, and you tell her, if there's anything I can do for her, just let me know." While my heroine in my other current book would say, "Geez, that sucks. She must have really pissed off the universe. If I were her, I'd have a couple drinks, put on my boots and start kicking ass. And there wouldn't be any taking of names."

It's not that I don't feel/know/understand things. I just put all those feelings/knowledge/understanding into books instead. In real life, "good" is good enough for me.
Posted by Marilyn at 1:00 AM 1 comment:

Email ThisBlogThis!Share to TwitterShare to FacebookShare to Pinterest
Labels: empathy, word use

I read a comment recently that normal is an odd word. Everyone's idea of normal is determined by their own experiences, beliefs, upbringing, perspective, etc., and since we're not all alike in those aspects, our ideas of normal are going to vary to some degree, thereby making the definition of normal pointless beyond how we as individuals perceive it.

Writers are often perceived as not normal. I've known I was a little bit different for as long as I can remember. I created people in my head and made up stories to go with them. I didn't need anything to keep me occupied; I could live with those people in my head for long stretches at a time. As a very introverted child, I did a lot of observing while other kids were doing. After I sold my first book, my mom was relieved, she later told me, because being a writer meant I was eccentric, not weird.

To the nonwriters in my life, I'm kind of a puzzle. I spend long hours alone; I research wildly varying subjects; I create people, entire families and towns, put them in danger, save them, break their hearts and heal them; I do it all sitting at the computer and looking no different from them when they're Facebooking or emailing; then suddenly, a book appears with my name on it. Most of them think I'm a bit odd.

But to me, this is normal and has been my normal my entire life. I wouldn't know what to do if the characters stopped speaking to me, if the plots stopped coming. I can't imagine what it's like for my nonwriting family and friends to be alone inside their heads.

Normal is in the eye of the beholder, which kind of defeats the purpose of the word, you know?
Posted by Marilyn at 1:00 AM 1 comment:

Talk to anyone who blogs regularly, and sooner rather than later they're going to admit that they have trouble coming up with ideas to write about, including me. Especially me. If I were a techy sort of person, I was thinking, I'd come up with a random idea generator. You know, you'd spin the computer, it would go round and round, slowly clicking to a stop, and there would be a word or phrase that you would then write about.

Then I realized what the low-tech version would be: a dictionary, magazine, book, whatever -- anything with words in it. You close your eyes, flip to a word, and that's what you write about. Who knows? You could hit on some pretty thought-provoking words.

Or you could hit the. An. Sphincter.

What can you say about the? It would be hard to read or write a book without it. I always mistype it hte. It's one of those invisible words that you skim over when you read it but sure notice when it's missing. Maybe the best thing about it: it makes for a short blog. :)
Posted by Marilyn at 1:00 AM 3 comments:

I know -- everyone's talking about the new year and resolutions or goals, so yep, I'm jumping in.

But not with resolutions or goals. I saw a note on friend Deb's Facebook page about a happiness jar: you take a glass jar with a lid, and every time something good happens, you make a note on a slip of paper and drop it in. Next New Year's Eve, you open the jar and read the slips.

I really like the idea. When we're having a tough time, it's easy to forget that there have been lots of good times before and hard to believe that they'll come again. But if you keep track of the highlights, the reminders are right there.

I've got tons of canning jars and reams of paper. I'm going to start my own happiness jar. The more time I spend focusing on that, the less I have for noticing the little things that annoy me. Who knows? Maybe I can fill two or three jars.